At this point in time you should have a strong grasp of some common note values used in music. It’s now time to start looking at time signatures. This important area of rhythm often causes a lot of confusion for guitarists. But don’t worry. As long as you understand all the notes values we’ve looked at so far, you won’t find time signatures too difficult to understand. 🙂

I’ve always found it best to teach time signatures using specific musical examples. So let’s revisit the chord progression that we covered in the guitar lesson on eighth notes…

If you own some guitar tuition books or magazines, then this way of seeing written music will be very familiar to you. But it’s probably a good idea for me to point out a few things of interest to you…

If you look at the standard notation above the TAB you’ll notice that there are five long horizontal lines. This group of lines is called the stave or staff and it’s the place where musicians write down notes. (Each line and space on the stave represents a different note).

Notice how there is a sharp sign on the stave just after the treble clef? This is called the key signature, and it tells music readers what key the music is written in. (Side Note: To learn more about key signatures, you can check out the free lessons section on my website).

There are often times when musicians will need to write down notes that are too high or too low to fit on the stave. To do this, they sneakily draw short horizontal lines to expand the range of the stave. These lines are called ledger lines, and you can see quite a few examples of them in the musical notation for the chord progression above.

When you see music written on the stave, it is written out in small chunks called bars or measures. The beginning and end of bars are shown by using vertical lines called bar lines. It’s important to know that each bar can only contain a certain number of beats. You can think of a bar of music as a storage box. Once the box is full, you’ll have to get another box.

Let’s now check out the progression again, but this time I’ve pointed out all the things we’ve just talked about…

I mentioned something earlier that is really important…

Each bar can only contain a certain number of beats.

This means that we need something in the musical notation that tells us how many beats we should have in each bar. (You can probably guess where we’re going with this. 🙂 )

In Western musical notation, time signatures are used to specify how many beats are in each bar of music. They also let us know which note value constitutes one beat. If you look closely at the chord progression above, you can see the time signature which looks like this…

This time signature is called 4/4 time (pronounced “Four, Four, Time”), and is by far the most commonly used time signature used in popular Western music. It’s used so often, that some musicians refer to it as common time.

Time signatures look a little bit like mathematical fractions, and usually have two numbers in them. The top number always tells you how many beats per bar, and the bottom number tells you the type of beat. In the example above, this means the following…

What this time signature means is that we can have as many notes in a bar of music as we want, but they have to all add up to four quarter note beats.

It’s important to realise that although there are a countless number of time signatures that can be used, the majority of the ones you’ll encounter can be understood with this handy graphic…

Learning this stuff can be a bit confusing without specific musical examples. So let’s take a look at a riff that I composed that’s not in 4/4 time… 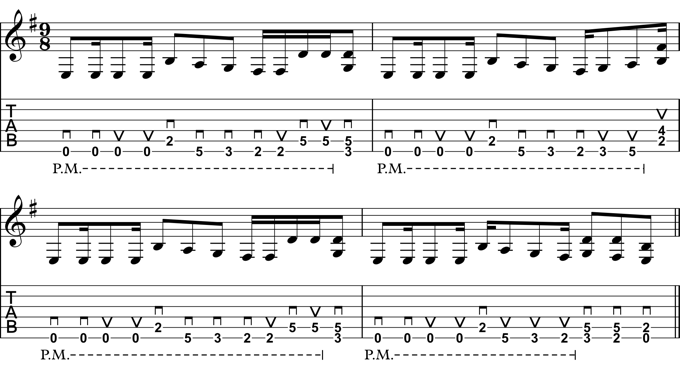 As you can see from the notation above, this riff has the following time signature…

This time signature lets us know the following…

This means that if we added up all the notes in a bar, then they would all add up to nine eighth notes.

Your ability to play in different time signatures will develop as you learn more pieces of music. (This will be especially true if you like styles of music like progressive rock or metal, which often venture outside of 4/4 time).

I hope you found this lesson helpful. Now that you understand what time signatures are, It would be a great idea to look through some music books that you own and focus on the time signatures being used. (If you don’t own any, then go to the local library and borrow some). This way you can see them being used in a real-life musical context.