In this guitar lesson we’re going to continue our rhythmic journey by tackling half notes. Like the whole notes we looked at in the last lesson, half notes are another vital note value that you need to understand.

So what exactly are they?

As you can see on the left, the symbol for a half note looks very similar to that of a whole note. But notice how there is a “tail” attached to it. (This is the surest way of distinguishing a half note from a whole note).

I need to mention here that the tail won’t always be on the right hand side of the note head. (The note head is the oval part of the symbol). This means that you’ll sometimes encounter half notes that look like this…

Notice how this version of the symbol has the tail attached to the left hand side of the note head. (You might want to check out some music books you own to see examples of this).

Don’t be thrown by how different it looks, because it still means the same thing. (A note that  lasts for two beats).

Now that we’ve checked out the symbol for half notes, let’s look at a really good exercise for practising them… 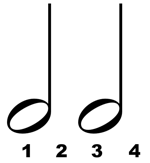 This exercise is very similar to the one you practised in the last lesson. Except this time you’ll be playing two notes every four beats. Here’s how to practice it…

To benefit the most from this exercise you should tap your foot to the metronome click, and also count the beats out aloud. It would also be very helpful to record yourself playing the exercise. This will allow you to more accurately judge how rock-solid your timing was as you did the exercise.

It’s probably a good idea if we look at a more musical way of practising half notes. Here’s a chord progression that I’d like you to practice…

If you learned the progression in the lesson on whole notes, then you’re probably feeling like you’re suffering from déjà vu! The chord progression shown above uses the exact same chords, in the exact same order. But this time most of the chords are being played using half notes. This has a couple of major implications…

That’s all for this lesson. Work hard at this stuff, because next time we’re going to be taking a look at quarter notes.