As you were filling out the table from Understanding The Lydian Mode: Part 1, then you might have been getting a somewhat unsettling sense of déjà vu. The good news is that you’re not going crazy. 🙂 What you were probably noticing was the fact that each lydian mode has a major scale that contains exactly the same notes. This is quite an important thing to understand, so let’s delve deeper into it…

It’s essential to know that every lydian mode has a relative major scale that contains exactly the same notes. To see what I mean, please check out the two scales below…

If you look closely at the scales above, you’ll probably notice the following two things…

This means that they are relative scales. In other words…

An Easy Way To Work Out Relative Major Scales

To work out the relative major scale of any lydian mode, all you need to do is find the fifth note of the lydian mode you want to use. Let’s take a look at an example of this now…

Although the method above is fairly straightforward, it does require having to work out the notes of the lydian mode first. While this isn’t a major problem, it can be a bit too slow if you’re jamming with other musicians and need to think very quickly. So here’s a really handy diagram that you might want to commit to memory now… 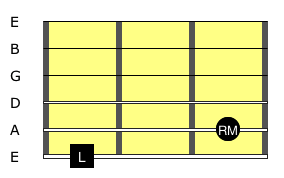 This fretboard diagram gives you a handy way of visualizing the relationship between the lydian mode and it’s relative major scale. To use this visualization method, all you need to do is follow these steps…

Work Out These Relative Major Scales

Using the method we’ve just talked about, please work out the relative major scales for the following lydian modes… 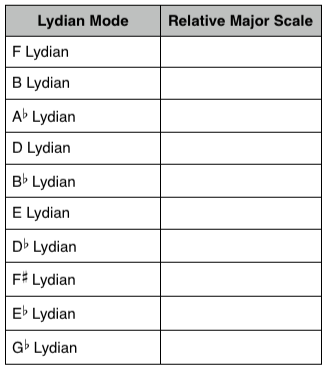 I’ll be giving you the answers after the next section of this lesson. So be sure that you fill out the table before reading any further. I know many people reading this lesson will disregard this sage advice, but I trust you’ll be one of the few diligent guitarists who don’t cheat. 🙂

Putting This Theory Into Practice

Let’s now look at a simple way of putting this music theory into practice. Please go get your guitar, and do the following steps 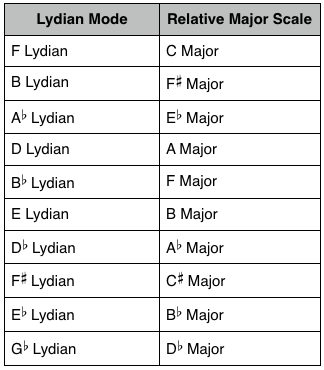 I hope you’ve found the two introductory lessons on the lydian mode helpful. I know we’ve only just scratched the surface, but at least you now have some idea on how the lydian mode is constructed, and how it sounds. If you really like the sound of lydian mode, then it’s definitely worth your time to explore it on a much deeper level.