In this guitar lesson we’re going to talk about a concept called key signatures. These are especially important to understand if you intend to read standard notation fluently. But even if you’re a staunch TAB only reader, learning about key signatures is helpful because it lays the foundation for some other theory that we’ll cover later on.

If you filled out the table from the Understanding The Major Scale lesson, then you might have noticed the following things…

One interesting thing is that no major scale shares the same number of sharps or flats. To see what I mean, please check out the following table that shows all the major scales that use sharps… 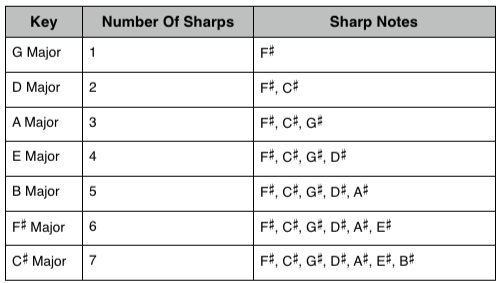 It’s extremely hard to explain key signatures without introducing at least a little bit of music notation. For this reason, I’m going to use some standard notation for this part of the lesson. Although I won’t be explaining how to read music, I’ll do my best to explain things in a way that is understandable for the TAB only guitarists.

Let’s imagine that we wanted to write out the F# major scale using standard notation. It would look something like this…

As you can see, I’ve written the note names above the notation, just in case you don’t read standard notation.

Now let’s write out the exact same scale, but this time we’ll use a key signature…

Notice how in this version of the scale there are six sharp signs written at the very beginning. This is called a key signature, and it tells us the following things…

As well as telling music readers what key a piece of music is in, using a key signature also…

Key Signatures For The Sharp Keys

For your reference, here are all the key signatures for the major scales that use sharps. I need to stress that you don’t have to memorize these unless you intend to read a lot of standard notation.

Key Signatures For The Flat Keys

The key signatures for the major scales that contain flats work in exactly the same way. But before we look at them, let’s look at all the flat major scale keys in table format… 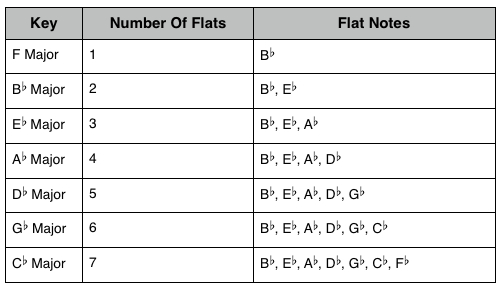 Let’s check out an example of a key signature being used in standard notation. To do this we’ll use the Db Major scale as an example. Here it is written out…

OK, let’s now check out the key signatures for all the major scales that use flats…

What About The C Major Scale?

Because the C Major scale doesn’t use sharps or flats, then it’s key signature would look like this…

Not a particularly exciting one is it? 🙂

I you found this introduction to key signatures interesting. if you’re intending to learn to read and write standard notation, then it’s critical to know this stuff. Even if you want to stick with reading TAB only for now, there’s certainly no harm in knowing about the existence of key signatures.