In the previous lesson, you learned how to work out the notes of any dorian mode using its musical spelling. In this lesson you’ll be learning about the relative major scales of the dorian mode and, more importantly, how to use them to improve your dorian mode soloing.

Every dorian mode has a major scale that shares the exact same collection of notes. This is referred to as the relative major scale, and you can see an example of this by checking out the two scales before…

As you can see from the above two staves…

What this means is that the two scales are relative scales. Or put another way…

Why This Stuff Is Important

This is simply not the case…

An Easy Way To Work Out Relative Major Scales

Rather than working out all the notes of the dorian mode first, I think it’s a good idea to use the following diagram to visualize the relative major scale… 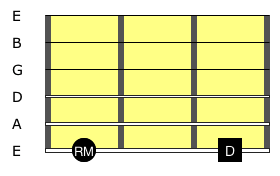 To use this diagram, all you need to do are following two steps…

Work Out These Relative Major Scales 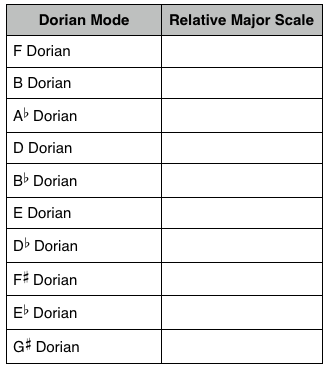 I’ll be giving you the answers after the next section of this lesson. So be sure that you fill out the table before reading any further. I know many people reading this lesson will disregard this sage advice, but I trust you’ll be one of the few diligent guitarists who don’t cheat. 🙂

Putting This Music Theory Into Practice

Now that we’ve talked about the theory, let’s now look at an application exercise that will help you to apply the theory in a musical context. Please do these three steps now… 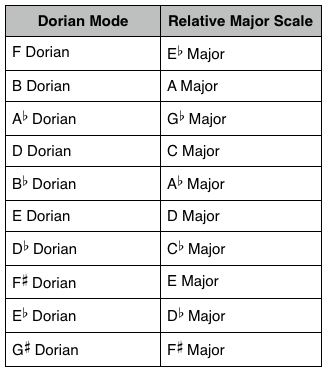 That’s all for this lesson. Hope you enjoyed it! 🙂  Remember, while learning the theory behind the dorian mode is an interesting intellectual exercise, it’s very important that you do the application exercises that we covered in this lesson and the last lesson. They’ll help you move beyond the theory, and enable you to learn the dorian mode in a practical way that will actually help you to become a better lead guitarist.