In this guitar lesson we’re going to talk a little bit about relative keys. Learning the concept of them is helpful for rock guitar because it helps you with selecting scales to solo over various chord progressions.

Before you start with this lesson, it’s very important that you’ve laid a foundation. So please make sure that you’ve done all the exercises in the following two lessons…

Once you’ve filled out the tables from those lessons, then the next thing you need to do is read this lesson…

All done? Good stuff! You’re now ready to get started with this lesson…

Please take some time to look at the tables you filled out for the major scales and natural minor scales. If you look closely at them, then you’ll notice something very important…

For every major scale there is a natural minor scale that shares exactly the same notes.

Let’s take a look at an example. Below is the D Major scale and the B Natural Minor scale written out in standard notation. Don’t panic if you don’t read music, because I’ve written the note names above the notation. 🙂

If you look closely at the music above, you will probably notice the following things…

Because these scales use the same key signature, they are called relative keys. In other words…

An Easy Way Of Working Out Relative Keys

While it would be very diligent of you to learn all the relative keys by rote memorization, I don’t think it’s necessary unless you want to read standard notation very fluently. For this reason, what we’re going to do is look at a quick-and-easy way of working out relative keys. Let’s get started by looking at the notes of the D Major Scale again…

If you look at the arrows I’ve drawn be low the table, you’ll notice that the notes B and D are three half-steps apart. This is really good to know because it means…

It’s quite common for guitarists to get these rules mixed up. So probably the best way to remember them is by memorizing the following diagram. This gives you a visual way of remembering the rules, and most of my students find it very helpful.

Work Out These Relative Keys 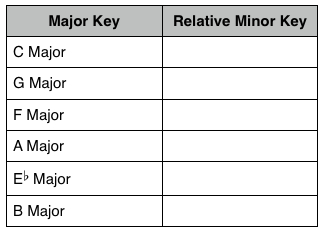 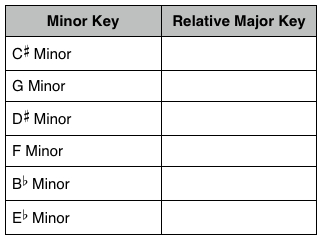 I’ll be giving you the answers at the end of this lesson. But please make sure you work these out now before reading any further. You’ll learn a lot more that way. 🙂

A Practical Use For Understanding Relative Keys

As I mentioned at the beginning of the lesson, understanding the concept of relative keys is useful when it comes time to solo over chord progressions. To help illustrate this, let’s take a look at the following chord progression…

Now, here’s a question for you. What would be another scale you could use to solo over the progression?

For Example: You might try using the following scales over the progression…

The Answers To The Earlier Questions

I’m assuming here that you took the time to complete the tables from earlier on in the lesson. Well done—by doing the work you’re being active in your learning. This will definitely help you learn the material a lot more thoroughly than those lazy bums who just read this lesson. 🙂

Here are the answers so that you can double-check what your worked out. If you made any mistakes, then see if you can figure out where you went wrong. 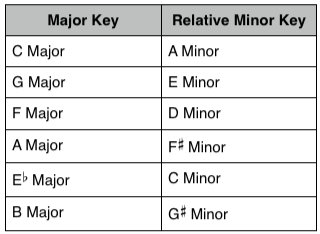 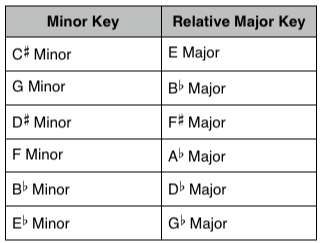 I hope you found this lesson helpful. Don’t forget to record the chord progression we looked at and try those different scales over it. You’ll find it a lot of fun, and it’s also a great way to use the theory in a practical setting.